In AERMOD View, this is set as the Surface Station Primary Met Tower in the Meteorology Pathway:

It is often not well understood what exactly potential temperature is or how the model utilizes this information.

The concept of potential temperature is used by the AERMOD model to simplify calculations. Note that pressure, temperature, and air density are inversely proportional to height changes. Potential temperature allows air temperatures at different altitudes to be compared using a standard level, avoiding the complexity introduced by the change in altitude.

Potential temperature (?) is the temperature that a parcel of air would have if it was adiabatically (without adding or removing heat) brought to 1000 mbar of pressure, as shown in the figure below. 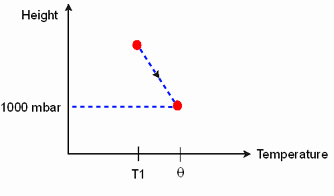 AERMOD calculates a vertical profile of potential temperatures, primarily for use in the calculation of plume rise. This profile is calculated from a reference temperature, measured at the primary tower, which is typically the surface station.