Thursday, August 19th, 2021AERMOD View, Modeling Tips
The AERMOD air dispersion model features many different settings which provide users the ability to customize how model output is presented. Within the model’s Source Pathway are multiple options for grouping sources, but just what do all these different groups mean? Below is a look at each type.

AERMOD natively calculates impacts from each modeled source independently from others. Source Groups (model option SO SRCGROUP) are a way for users to depict impacts from combinations of sources. This is a mandatory option in the model with a default group set to ALL which reports the cumulative impacts from all sources combined. Groups can have as few as a single source or a combination of multiple sources.

The screenshot below depicts source group settings in AERMOD View. In this example, different groups are used to combine output from sources of the same process (e.g., boilers, exhausts, etc.). This provides a better understanding of impacts from a subset of sources providing context to which sources may contribute to maximum cumulative concentrations.

Each group will have its results tabularized in the main output file and its own unique set of output files. Options for the output files can be set in the Output Pathway. 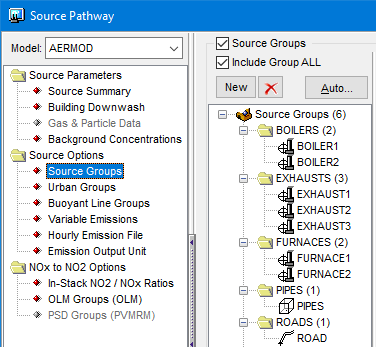 In AERMOD View, the Source Pathway when modeling with AERMOD 21112 includes the Buoyant Line Groups settings. Modelers can still use a single set of average properties for all lines, but they can also separate sets of lines into their own groups as depicted in the example below.

The Tier 3 screening methods for assessing nitrogen dioxide concentrations – the Ozone Limiting Method (OLM) and Plume Volume Molar Ratio Method (PVMRM) – have their own unique grouping options that aid the model in calculating the ratios of total NOX, ozone, and NO2 in the ambient environment.

The OLMGROUP ALL setting which combines plumes of all sources in the model run is broadly recommended by the U.S. EPA whenever OLM is applied. AERMOD View users will find that the OLMGROUP ALL function is automatically enabled when selecting the OLM option. 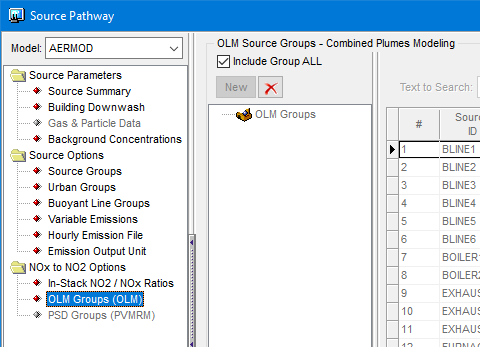 OLM Groups with OLMGROUP ALL Enabled
The other NO2-specific grouping feature is the PSD Groups function (model option PSDGROUP). This is a non-default ALPHA option which means the Non-Default Regulatory Options must be enabled on the Control Pathway.

With this grouping function, Source Groups are replaced with three predefined groups in which sources can only appear in a single group: 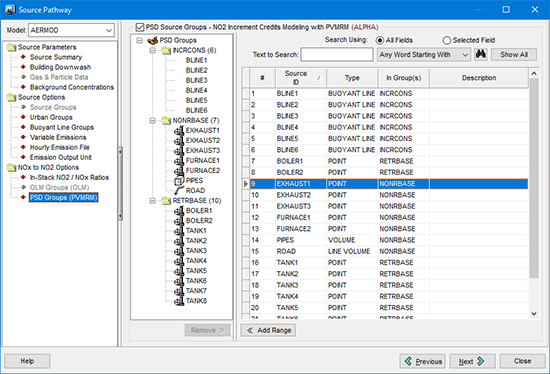 The final grouping function AERMOD View users will see on the Source Pathway are the Urban Groups. This setting is tied to use of the Urban dispersion coefficient on the Control Pathway’s Pollutant/Averaging options. Here, users can define if there is a single urban group applied to all sources or if multiple urban groups exist in the modeling domain. Each group must have a Population value defined as described in Section 5.2 of the U.S. EPA’s AERMOD Implementation Guide. 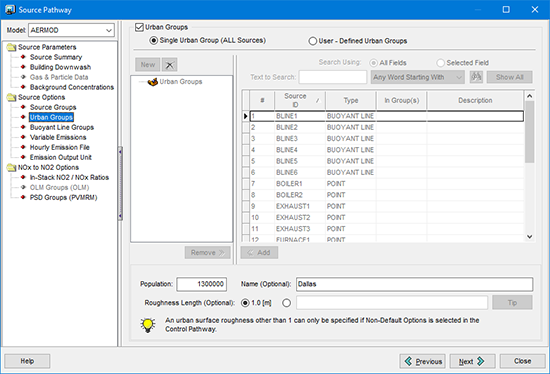