Wednesday, July 20th, 2022AERMOD View, Modeling Tips
With the latest release of the AERMOD model dated 22112, the U.S. EPA has continued to expand the formulated capabilities of the model. Most of these updates have been added as ALPHA non-default options, a concept we covered in a previous modeling tip. AERMOD 22112 contains 6 new ALPHA options which are described below:

After identifying the source – with the source’s height identified as the height above sea surface – the platform is identified with the following parameters:

The Travel Time Reaction Method (TTRM) was first implemented as a stand-alone ALPHA option in AERMOD 21112. The new TTRM2 option was integrated to allow the model to assess TTRM simultaneously with existing NO2 conversion methods (PVMRM, OLM, & ARM2).

When TTRM2 is selected along with one of the other NO2 conversion methods, TTRM will be implemented for near-field receptors where the fraction of conversion remains below the upper limit of the equilibrium fraction (usually 0.90). For all other receptors, the other specific method is used.

This new specialized point source type was developed to further study the effect of the lateral shift of the building wake cavity that forms when the wind is oblique to one of the longer sides of an elongated building.

Unlike traditional point sources, sidewash points are defined by their location, height, emissions, and the dimensions of the rectangular building that will influence flow (width, length, and compass angle). This source is designed to only calculate concentrations within the building wake cavity, and it does not consider terrain, traditional plume rise (i.e., momentum vs. buoyancy), and PRIME downwash is not applied. 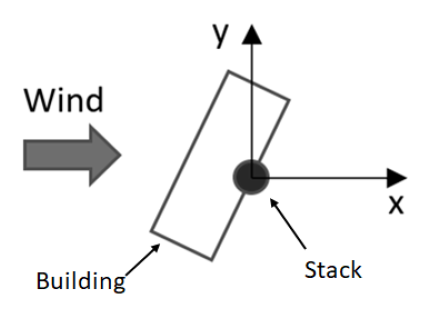 This option (RLINEFDH) removes the displacement height used in the RLINE source algorithm for calculating the wind profile near the surface. With this option implemented, the wind speed profile is calculated similar to other AERMOD source types.

Two additional options have been added to the existing LOW_WIND keyword:

For the AWMAUTURB & AWMAUTURBHX options, internal limits were modified (tiz from 50 to 18, tiy from 50 to 6).

Lakes Environmental’s development team is hard at work incorporating these new features into the AERMOD View application. A new version will be ready soon so users can begin testing and evaluating these new model options.